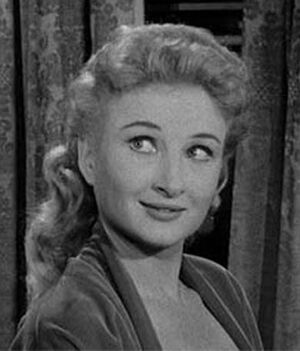 Annabelle Loren was the fourth wife of millionaire Frederick Loren. She died at The House on Haunted Hill when she tried to kill her husband there.

Annabelle married millionaire Frederick Loren at some point, and became his fourth wife. She tried an unknown number of times to kill Frederick for his money, but all attempts apparently failed. At some point, she came up with the idea of holding a haunted house party, and Frederick rented The House on Haunted Hill for it.

When Frederick invited five different people to the party with a reward of $50,000 altogether if they could survive the night there, Annabelle had an affair with one of the guests, Dr. David Trent. The two conspired to scare one of the guests into killing Frederick with illusions of ghosts.

On the night of the party, after the five guests arrive at the house, Annabelle refuses to join the party, until Frederick forces her. Shortly before midnight, when the caretakers of the house are to leave and lock the house up until morning, Annabelle comes downstairs to the party and gives each of the guests a handgun for protection.

Meanwhile, Annabelle and/or Trent place fake decapitated heads in Nora's bedroom and then remove them as part of their plot to scare Nora into shooting Loren. A short while afterwards, Annabelle hangs herself and pretends to be dead, but secretly survives via a hanging harness.

Lance and Trent place the seemingly dead Annabelle in Frederick's room. There she remains; except for when she is left alone, when she sneaks out of the room and poses as her own ghost to Nora to further scare her.

Eventually, Trent arrives to inform Annabelle that their plan is falling into place, and to meet him down in the basement when she hears the gunshot. Annabelle goes down into the house's cellar to find no sign of Frederick or Trent, when the doors lock themselves and what looks like Frederick's ghost rises up from the cellar's vat of acid. The apparent specter of Annabelle's late husband attacks and advances on her, making her fall backwards into the vat of acid. In there, the acid apparently killed Annabelle, dissolving her flesh.