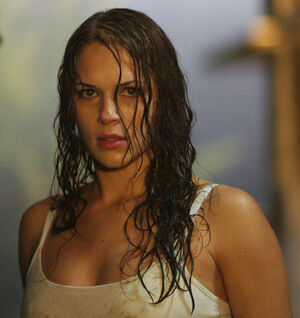 Ariel Wolfe is the sister of Sara Wolfe and a survivor of the last incident at the "House on Haunted Hill".

When Ariel's sister, Sara, returned from Steven Price's party at the Vannacutt Psychiatric Institute for the Criminally Insane claiming that the asylum really was haunted and that Price and most of the other guests were killed by ghosts, Ariel did not believe her and became more distanced from her sister.

Ariel receives a message from her mother. Ariel's sister Sara has apparently committed suicide. Ariel is grief-stricken by the news. Paul, one of Ariel's photographers at the magazine which she edits, finds her and hears what has happened. She asks him to help her sneak into Sara's apartment, in order to verify that Sara actually killed herself.

Paul and Ariel break into Sara's apartment. There Sara's ghost appears to Ariel, asking her to "Help them." Before Ariel can explain to Paul what she just saw, Dr. Richard Hammer arrives. He tells Paul and Ariel that Sara wanted to return to the Vannacutt asylum, in order to find the Baphomet Idol. He also warns the two to be careful before they leave.

Paul drives Ariel back to her home, where the two are kidnapped by Desmond Niles and his team of mercenaries. When Ariel sees that Desmond has Dr. Vannacutt's journal, she realizes that Sara was actually murdered by Desmond. Desmond's mercs take Ariel and Paul with them to the Vannacutt Psychiatric Institute. There they meet Dr. Hammer and his assistant Kyle. While Desmond and Michelle are distracted, Ariel tries to escape but is stopped by Harue. The facility then goes into lockdown, but Desmond disables the lockdown mechanism. The group split up in search of the Baphomet Idol, and Ariel goes with Desmond.

While Ariel and Desmond are searching the asylum for the Idol, a ghost locks Ariel in his cell. He shows her a vision of himself leading a revolt against Vannacutt, the night the asylum burnt down. Ariel wakes up from the vision in a straightjacket. Desmond, Michelle and Dr. Hammer find and free her. Ariel realizes from the ghost and the vision that her sister wasn't mad, that the house really is haunted. Hearing Kyle scream, Ariel and Company run back to the lobby. They find Norris torn apart and Kyle traumatized.

Kyle confronts Ariel about the house really being haunted, when the lockdown starts again. Ariel runs for the lobby's main doors as the building seals itself up. She jumps through the entrance, and out of the house, at the last second. Ariel goes to Desmond's cars to escape with Paul, but finds Paul and Samuel are gone. Realizing that they have gone into the facility, Ariel decides to return for Paul. The house lets her back in. Ariel explains to the others that the house really is haunted, that they are in mortal danger. Desmond refuses to believe her.

Ariel dives into the pool after Kyle and revives him, but they find themselves unable to climb out of the water. Then both are attacked by the ghosts of asylum patients who died in the hydrotherapy pool. One ghost shows Ariel a vision of how it was plunged into the water and perished. More ghosts drag Kyle beneath the surface, killing him before Ariel can do anything. Paul and Dr. Hammer rescue Ariel from the pool by lowering a chain and hoisting her to safety. All three continue on, entering the washroom. There they find a grated drain which they vainly attempt to open. Ariel then has another vision which shows her that the Baphomet Idol is hidden in the crematorium...and that the Idol must be destroyed, and the ghosts freed, before Ariel and Company can escape the house.

Ariel, Paul and Hammer enter the crematorium. Through her previous vision, Ariel guides them through a hidden door in one of the furnaces to the heart of the house. When the trio can't find a way to successfully destroy the Idol, Ariel decides to remove it from the facility instead to see if that will work. Ariel notices that the statuette is small enough to fit through the grate of the washroom's sewer-drain, so she and Paul take it there. She and Paul pull the Idol from its organic throne, but in doing so they alert Vannacutt and the other ghosts. The trio run back into the crematorium; there they are confronted by Desmond, who demands the Idol from them. However, the ghosts of the asylum's tuberculosis patients attack and kill Desmond. Ariel and Dr. Hammer run back to the washroom with the Idol, while Paul is separated from them.

Just as Ariel is about to throw the Baphomet Idol down the drain, Hammer's greed gets the better of him; he's spent the greater part of his career searching for this idol, which is worth millions, and he does not intend to let it just slip away. He attacks Ariel, wrestling the statuette away from her before she can flush it. As both fight murderously over the Idol, Vannacutt and several other ghosts arrive. Just as Hammer gains the upper hand, he is attacked by Dr. Vannacutt; this allows Ariel to take back the Idol, just before Vannacutt stuns her by throwing her against a wall.

Vannacutt confronts Dr. Hammer, killing him just as Ariel regains consciousness. She recovers the Idol and drops it down the drain into the sewer. With Baphomet's power over the house and its ghosts broken, the ghosts of Vannacutt's patients - including the inmate who led the 1931 revolt - turn on him. Ariel steps aside, allowing the ghosts to tear Vannacutt apart and then cross over.

Ariel reunites with Paul in the building's lobby. The two embrace and kiss passionately, then go out and leave in Desmond's car. Yet Ariel realizes that, by sending the Baphomet Idol into the sea, they have also freed Baphomet's evil from the house.

Ariel fancied Paul and was in love with him. When she discovered that he was trapped in the Vannacutt asylum she went back in for him, despite the dangers and the horrors; and when the Furnace Ghosts separated her from Paul she was reluctant to leave him behind.

Ariel had a deep hatred for Desmond for killing her sister, and was more than willing to kill him.

Ariel initially disliked Dr. Hammer when she discovered that he was lying to her about talking with Sara; she left him trapped in the Vannacutt asylum with Desmond's team, when her first opportunity to escape presented itself. However, over the course of events in the asylum, she warmed up to him - literally, when he helped Paul save her from the ghost-infested Hydrotherapy Pool. She consoled Hammer when he blamed himself for Kyle's death, and showed pity for him after he was killed by Dr. Vannacutt. Nonetheless, Ariel was willing to fight or kill Hammer, if and when she had to; to that end, Ariel aimed a gun at him when he was hypnotized by the Baphomet Idol in the Heart of the House.

Ariel left Kyle trapped in the Vannacutt asylum with Desmond's team to die when she managed to escape the first time. But over time, she quickly came to care about Kyle, as she tried to save him from drowning or being killed by the ghosts in the hydrotherapy room, and was upset by his death.