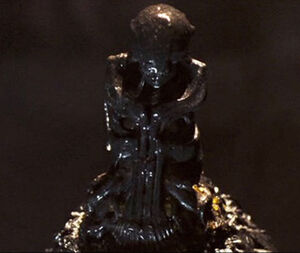 The Baphomet Idol is an ancient statuette of the demon Baphomet which is apparently possessed by Baphomet's power and evil. It is responsible for keeping the ghosts of everyone who died in the Vannacutt Psychiatric Institute for the Criminally Insane trapped in the facility.

Nothing is known about the Baphomet Idol's origins, except that it has existed since the Dark Ages and that it was carved in the image of the demon Baphomet. During that time, Baphomet cults revered and worshipped the Idol. However, when Baphomet cults were forced to go underground at the time of the Inquisition, the Idol disappeared and was not seen again for centuries.

At some point during his travels around the world, Dr. Richard Vannacutt found the Baphomet Idol and was corrupted by its power. The Idol caused him to perform horrific and torturous experiments and medical procedures on his patients at his psychiatric institute, and to hide the Idol in a hidden chamber at the heart of the facility. The Idol caused the souls of any and everyone who died in the building over the years, including Dr. Vannacutt himself, to become trapped in the house and to trap and kill nearly anyone else who entered the asylum. The Idol, meanwhile, remained hidden in its chamber at the heart of the house.

In 2007, approximately 80 years after Vannacutt hid the Idol in the heart of the house, when Ariel Wolfe, Paul and Dr. Richard Hammer were trapped in the facility, they searched for the Baphomet Idol to destroy it and escape the house. The trio eventually found the chamber where the Idol was hidden, and when Ariel was unable to destroy it, they decided to remove it from the building instead.

Ariel and Paul tore the Idol from its organic altar, causing a disturbance which alerted the ghosts that the Idol was in jeopardy. Ariel and Dr. Hammer ran with the Idol to the asylum's washroom, pursued by the ghosts, to throw it down a sewage drain and out through the building's sewer into the sea. However, just as Ariel was about to throw the Idol down the drain, its evil overcame Dr. Hammer and caused him to attack Ariel and wrestle the Idol away from her.

Dr. Hammer eventually regained control over himself, and Dr. Vannacutt knocked Ariel out. However, while Vannacutt was distracted killing Hammer, Ariel regained conscious and took the Idol. Just as Vannacutt turned his attention back to Ariel, she dropped the Idol down the drain, sending it into the sewer. The Idol then travelled through the facility's sewer and out to sea taking Baphomet's power over the house with it from the building.

The Baphomet Idol later washed up on a beach, and was found in the sand by a couple while they were making love.

The Baphomet Idol is apparently possessed by the power and the evil of Baphomet. It can corrupt those that desire it or become attached to it, and it can also keep dead souls bound to earth and force them to do Baphomet's bidding (although the souls can be freed if the Idol is separated from them). The Idol is highly impervious to damage as well, and possibly even indestructible, as when Ariel shot the Idol over and over, it was not even scratched. It is also hinted that the Idol is alive as well as possessed, as several times, faint Latin chants can be heard coming from the Idol, and when Paul and Ariel pulled the Idol from its altar, it emitted a shriek of pain.