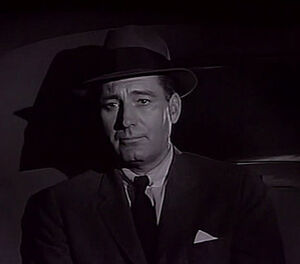 Dr. David Trent was the secret lover of Annabelle Loren, and one of the guests to the party at The House on Haunted Hill.

Trent was a psychiatrist, and was secretly having an affair with Annabelle Loren, the wife of millionaire Frederick Loren. When Frederick held a haunted house party at The House on Haunted Hill and invited Trent, Trent accepted the invitation and conspired with Annabelle to scare one of the other guests into killing Frederick, as "the perfect crime."

Trent is driven to the House on Haunted Hill in a funeral car with the other four guests. They arrive at the house and go inside, where Loren meets them and has guest Watson Pritchard take them on a tour of the house. Loren explains that at midnight, the caretakers of the house will leave and lock all doors and windows, trapping the guests until morning.

When Lance is mysteriously hit on the head, Dr. Trent treat his injury, and later places a fake decapitated head in Nora's suitcase shortly before midnight to scare her. A few minutes before midnight, Trent and the other guests meet downstairs, and Frederick gives the guests a choice to leave now with the caretakers before they lock up the house, or to stay for the night. However, the caretakers leave early before any of the guests can choose to leave, trapping them in the house for the night until 8 AM.

When Nora is left upset and in hysterics by the decapitated head Trent put in her suitcase, the guests decide to leave her alone. Later, Trent attacks Nora in the dark, throwing her into a room and leaving a fake decapitated head in her closet. A while later, Trent and Annabelle fake Annabelle's death by hanging, and Trent later holds a meeting between the guests and Loren discussing the incident. Trent and Loren conclude that Annabelle was actually murdered, and Trent points the blame to Mr. Loren.

Ultimately, the guests decide to go to bed for the night, and to assume that anyone caught out of their rooms is the murderer. When Nora goes downstairs and is scared by several fake supernatural events (presumably set up by Trent and Annabelle), Trent meets up with Loren and the two decide to search the house for Nora.

While Loren goes downstairs, Trent meets up with Annabelle and informs her that Nora is certain to shoot Frederick once she sees him. He tells Annabelle to wait until he hears Nora shoot Frederick, then come down to the basement. After Nora shoots and supposedly kills Loren in the basement, Trent goes down there to dispose of Frederick's body in the basement's vat of acid. However, the actually-alive Frederick apparently takes Trent by surprise and kills him; most likely by pushing him into the acid as no body is seen.