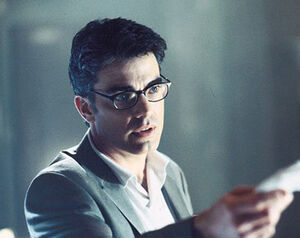 Donald W. Blackburn, M.D. was Evelyn's secret lover, and was murdered by her.

Evelyn Stockard-Price had an affair with Blackburn. When Evelyn and her husband, Steven H. Price, decided to hold Evelyn's birthday party at the Vannacutt Psychiatric Institute for the Criminally Insane, Evelyn secretly invited Blackburn, so that the two could scare the other guests into turning on and killing Price.

While Steven, Sara, Eddie and Pritchett go down into the old asylum in search of a master control for the lockdown mechanism, Blackburn stays upstairs at the building's lobby with Evelyn and Melissa. Eventually, Sara, Eddie, Price and Pritchett return with Sara covered in blood; having almost been dragged into a vat of blood, and Melissa goes down into the asylum, exploring.

When the group hear Melissa scream from in the asylum, Blackburn, Sara, Eddie and Price go down into the asylum to find her, but they only find Melissa's camera and a trail of blood. The group return to the lobby with the camera, and discuss trying to escape the house. While Sara and Eddie go off to find a way out of the house and Pritchett goes looking for something to drink, Blackburn goes back down into the asylum looking for Melissa.

When a brownout occurs, Blackburn and the others go to the asylum's electrotherapy compartment to find Evelyn being electrocuted (as part of her and Blackburn's plan to fake her death to further scare the guests into killing Price). Pritchett turns the machine off, but the guests are convinced that Evelyn is dead (though she secretly survived via adropine). Grief-stricken, Price threatens the guests with a gun and accuses them of murdering his wife, prompting Eddie to knock him out.

He revives Evelyn, and Blackburn informs her that one of the guests are sure to kill Price soon. Evelyn, however, is doubtful that the guests are at the breaking point yet, and decides that they need a real death staged to look like Steven is the murderer. Evelyn then attacks and stabs a shocked Blackburn wit a scalpel, and Blackburn stares into Evelyn's face before dying.

After he died, Blackburn's soul presumably joined the other ghosts trapped in the house. However, it can also be presumed that Blackburn's ghost was freed from the house when Ariel Wolfe removed the Baphomet Idol from the facility in Return to House on Haunted Hill.

Evelyn and Blackburn had a lustful affair, though Evelyn did not truly care about Blackburn. Blackburn was visibly shocked at Evelyn when she fatally stabbed him.

Blackburn expressed concern for Sara when she was left traumatized from the incident in the asylum, though this concern was most likely a ruse. Blackburn later admitted that he was confident Sara had the potential to be the one who would kill Price.