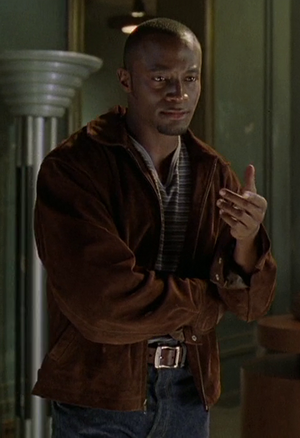 Eddie Baker is one of the two survivors of Steven Price's party at the "House on Haunted Hill".

Eddie was orphaned and adopted, and used to be a baseball player. When Eddie received an invitation to Steven Price's party at the "House on Haunted Hill", he accepted it.

Eddie goes to the Psychiatric Institute with three other guests, where they find that they aren't the ones either Steven or his wife Evelyn originally invited to the party. After Eddie and the other guests arrive, the facility mysteriously goes into lockdown and all the doors and windows are automatically sealed with iron gates, trapping the guests inside.

Shortly afterwards, they are each given a handgun for protection, but they can't tell whether or not they are loaded with actual bullets as the clips are welded shut. Eddie goes with Price, Jennifer Jenzen and Watson Pritchett down into the old asylum in search of a mechanism to reverse the lockdown. They come across the asylum's Saturation Chamber before getting separated from Price and Pritchett.

When Jennifer is able to rewire the asylum to reactivate its lights, Eddie realizes that she isn't who she says she is, and demands she tell him who she really is. Jennifer confesses that her real name is Sara Wolfe, while Eddie sees something down a corridor and is lured away. A short time later, Eddie finds Sara being dragged into a vat of blood by an unseen force, and pulls her out of the vat.

Eddie takes a traumatized Sara back up to the house, where Eddie demands to know what happened to Sara. Shortly after, the group hear Melissa scream from in the asylum, and they go back down to find her. However, they find no trace of Melissa apart from her camera and a fresh trail of blood leading across the walls of a surgery ward. The group return up into the house, where a frustrated Eddie becomes more violent towards a drunken Pritchett. Evelyn then contemplates shooting Price in front of the shocked group with her handgun, and it turns out that the handguns are loaded with real bullets; making Eddie and the others more suspicious of Price.

The group then decide to try and escape the facility; and Sara and Eddie try to crowbar the iron gate on one of the windows open, when a brownout occurs. Eddie, Sara, Blackburn and Price go down to the asylum's electrotherapy room to find Evelyn electrocuted to death. A grief-stricken Price then accuses Eddie and the guests of murdering his wife, and when he threatens Sara with a gun, Eddie attacks Price and knocks him out.

The group lock Price in the Saturation Chamber, and Sara and Eddie go off to find a way out while Blackburn stays to guard Price. Sara and Eddie come across Dr. Vannacutt's office, and when they go inside to investigate, Sara discovers that everyone who was invited (except for Blackburn) is related to one of the old asylum's orderlies. Pritchett then arrives and tells them that the house is responsible for rewriting the guest list. Sara begins to consider the possibility, but Eddie is skeptical and insists that it's insane.

Eddie, Sara and Pritchett go back up to the house and wait for Blackburn to return. When Blackburn does not come, and Pritchett predicts that he is dead, the trio go back down into the asylum for him. They return to the Saturation Chamber, where they find Price gone, and Blackburn's decapitated corpse inside the chamber. Sara and Eddie immediately suspect Price of murdering Blackburn, and split up to search the asylum for him.

When Sara shoots Price at the stairs that lead up into the house, Eddie and Pritchett rush to the scene to find Price seemingly dead, and Sara traumatized. Eddie comforts Sara, and he and Pritchett take her past Price and back up to the house, where the trio resume trying to crowbar the sealed windows open.

When the group hear Price screaming down in the asylum, Eddie is shocked that he is alive. The Darkness then emerges from the asylum up into the house, absorbing Pritchett. Price, Sara and Eddie realize that the facility really is alive, and that Pritchett was right all along. The Darkness chases the trio through the house, up into the attic. Price is able to open one of the windows in the attic before he is assimilated, and Sara and Eddie try to escape through the open window.

Though Sara is able to escape through the window onto the building's roof, before Eddie can follow her, The Darkness severs the ropes holding the window's iron gate up, closing it and trapping Eddie. The Darkness corners Eddie and taunts him through the assimilated ghosts, then prepares to absorb him. Out of fear and desperation, Eddie reveals to The Darkness that he was adopted, and Pritchett's ghost reopens the window long enough for Eddie to escape through onto the roof from The Darkness with Sara. Sara and Eddie then find the envelope containing the five $1 million checques jammed under the iron gate, with the 5 million dollars as their prize for surviving.

Sara and Eddie apparently had a romantic interest in one another, and Eddie once even flirted with Sara.

Eddie eventually became somewhat irritated by Watson's insistence that the house was alive and haunted, and at one point even violent.