House on Haunted Hill Wiki
Register
Don't have an account?
Sign In
Advertisement
in: Characters, 1959 characters, Males,
and 2 more 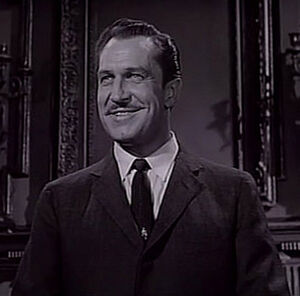 Frederick Loren is an eccentric millionaire who held a haunted house party at "The House on Haunted Hill".

Frederick Loren was a millionaire who owned numerous companies, and married four times. His first wife disappeared, and the other two died of heart attacks. Frederick's fourth wife, Annabelle attempted an unknown number of times to kill Frederick for his money, but these attempts failed.

When Annabelle came up with the idea of throwing a party at a haunted house, Frederick rented "The House on Haunted Hill" for the party and invited five people to the party; all of whom needed money: Lance Schroeder, Nora Manning, Ruth Bridgers, Dr. David Trent, and the owner of the house, Watson Pritchard. At midnight, all of the house's doors and windows would be locked, trapping the guests and Loren inside until 8AM, and any of the guests that could survive the night in the house would be given $10,000.

After the guests arrive, Frederick tries to get Annabelle to attend the party, but she refuses until he eventually forces her. A short while after the arrival of the guests, Frederick goes down to greet them, and explains the rules. Watson Pritchard, one of the guests and the owner of the house, then takes Loren and the other guests on a tour of it.

Shortly after, guest Lance Schroeder mysteriously hits his head in the basement, and Nora claims to see a ghost. At 11:45, shortly before midnight, Frederick and Annabelle give each of the other guests a gun for protection. At 11:49, Frederick then gives the guests a choice to stay for the night or leave with the caretakers, but before any of the guests can choose, the caretakers, the Slydes, leave early, trapping Frederick and the other guests inside the house until they return at 8AM.

Minutes later, Nora takes Loren and the other guests to her room to show them a decapitated head she found in her suitcase, but when they find there is no head, they leave an upset Nora alone in her room. Dr. Trent accuses Loren of being responsible for frightening Nora, and some time later, Annabelle hangs herself and seemingly dies. Trent leaves Annabelle on an upset Frederick's bed, and the guests leave Frederick alone with Annabelle's body. A short while later, Pritchard comes in and claims to Frederick that Annabelle has now joined the ghosts of the house. But a grief-stricken Loren does not listen and angrily orders Pritchard to stay out of the room.

Frederick then goes downstairs to the living room, where he and the other guests (except for Nora) discuss Annabelle's death. Frederick and Dr. Trent suspect that Annabelle was actually murdered, and while Trent and the other guests express suspicious of Frederick, Frederick believes one of the guests is the culprit. The group subsequently decide to all go to their rooms and assume that anyone who leaves their room is the killer.

Frederick and the guests go to their rooms, but when Frederick hears screaming and organ music coming from downstairs, he and Dr. Trent leave their rooms and decide to split up and search the house for the person who screamed. When Frederick arrives in the basement, he comes across Nora, who shoots at him (unaware that her gun is loaded with blanks). Frederick pretends to die from the gunshot, and once Nora leaves and Dr. Trent arrives to dispose of Frederick's body, Frederick takes Trent by surprise; killing him by sending him into the basement's vat of acid.

When the actually-alive Annabelle (who had conspired with Trent to get Nora to kill Frederick) arrives at the basement, Frederick uses a skeleton controlled by him via strings to attack Annabelle and cause her to trip and fall into the acid. The other guests arrive shortly after, and Frederick explains what was happening. He then goes back upstairs, saying that he is ready for justice to decide whether or not he is guilty for the deaths of Trent and Annabelle.