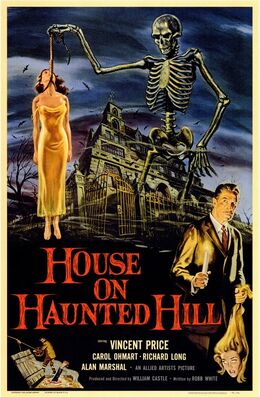 House on Haunted Hill is a 1959 American B movie horror film from Allied Artists. It was directed by William Castle, written by Robb White, and starring Vincent Price as eccentric millionaire Fredrick Loren. He and his fourth wife, Annabelle, have invited five people to the house for a "Haunted House" party. Whoever stays in the house for one night will earn $10,000 each. As the night progresses, all the guests are trapped inside the house with ghosts, murderers, and other terrors.

Exterior shots of the house were filmed at the historic Ennis House in Los Feliz, California.

House on Haunted Hill is the tale of five people invited to stay the night in a supposedly haunted house by an eccentric millionaire, Frederick Loren (Vincent Price), who is throwing the "party" for his fourth wife, Annabelle (Carole Ohmart), with the stipulation that the power will be out and all doors will be locked at midnight, allowing no accessible escape. Anyone who stays in the house for the entire night, given that they are still alive, will each receive $10,000.

The five guests all arrive in separate funeral cars with a hearse leading, which he explains may be empty now, but they may be in need of it later. He explains the rules of the party and gives each of the guests a .45 caliber pistol for protection. Loren's wife tries to warn the guests that her husband is psychotic, causing them to be very suspicious of him, especially Nora Manning (Carolyn Craig), who becomes convinced that he's trying to kill her when she keeps seeing mysterious ghouls, including the ghost of Annabelle, who had hanged herself after being forced to attend the party.

Almost as frightened as Nora is Watson Pritchard (Elisha Cook), the house's owner and another of the party's guests. He is fully convinced that the house is genuinely haunted by the ghosts of those killed there in the past, and that those ghosts have the power to "come for" and kill anyone in the house that they wish.

Eventually it is revealed that Annabelle faked her death in league with one of the guests, Dr. Trent (Alan Marshal). The two have been attempting to frighten Nora so badly that she will be spooked into shooting Frederick. Indeed, after being driven into a fit of hysteria by the repeated frights she has experienced during the evening, Nora does fire upon Frederick, assuming he is going to kill her. After she flees the room, Dr. Trent slips in and tries to get rid of Frederick's body by pushing it into a vat of acid, but the lights go out and the sounds of a struggle are heard.

After hearing the sound of the gunshot, Annabelle enters to confirm that her plan to kill her husband has come to fruition. Suddenly, a skeleton emerges from the acid accompanied by Frederick's voice. The specter approaches Annabelle as she recoils in terror. In this panic, the screaming Annabelle accidentally backs into the acid herself. The real Frederick walks out of the shadows, holding the contraption that he was using to control the skeleton. In his triumph, he watches Annabelle disintegrate.

Nora tells the other guests that she's shot Loren in the wine cellar, and they all rush down there. When they arrive, they see that he's actually alive, and he tells Nora that the gun she had fired at him had been loaded only with blanks. He then explains to guests that his wife and Dr. Trent had been trying to kill him and that they each have met their end in the vat of acid. He says solemnly that he is "ready for justice to decide" his guilt or innocence.

Just when everyone thinks the trauma is finally over Watson Pritchard looks into the acid and asserts that Annabelle and Dr. Trent have now joined the ranks of house's ghosts. Then, with a terrified expression on his face, he announces that the ghosts are now coming for him, "and then they'll come for you."