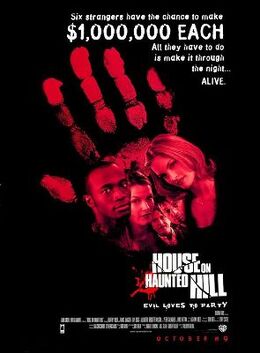 House on Haunted Hill is a 1999 American horror film, directed by William Malone and starring Geoffrey Rush, Famke Janssen, Taye Diggs, Ali Larter and Jeffrey Combs. It also includes a cameo appearance by Peter Graves. Produced by Robert Zemeckis and Joel Silver, it is a remake of the 1959 film of the same name directed by William Castle.

House on Haunted Hill marks the producing debut of Dark Castle Entertainment, a production company that went on to produce Thirteen Ghosts and House of Wax, two films which were also remakes. The film was followed by a sequel, Return to House on Haunted Hill, which was released in both rated and unrated editions on DVD in 2007.

The film is set in an abandoned asylum, the Vannacutt Psychiatric Institute for the Criminally Insane, where numerous murders were committed in the past, mainly the 1920s. The head of the facility, Dr. Richard B. Vannacutt (Jeffrey Combs), performed grotesque experiments and medical procedures on the patients, killing many in the process. The hospital was closed in 1931 after the patients escaped from their cells, killing almost the entire staff (all except five) and burning the hospital. All the patients died, their souls rumored to be trapped there forever. Vannacutt had rigged the building with numerous iron gates, activated by cranks and levers, to serve as barriers to keep patients from leaving the building, should they escape; some of these were controlled by huge, clock-like timers that wouldn't open for twelve hours. During the fire, he released these gates, keeping the inmates, employees and the fire itself contained. After several unexplained deaths during reconstruction of the facility, it was dubbed "The House on Haunted Hill".

Evelyn Stockard-Price (Famke Janssen), a spoiled trophy wife, is in a disintegrating marriage with Steven H. Price (Geoffrey Rush), an amusement park mogul with a wicked sense of humor, each of whom would gladly kill the other. Evelyn fancies spectacular parties, and Steven leases the house from the owner, Watson Pritchett (Chris Kattan), for Evelyn's Halloween birthday bash. Evelyn gives Steven a guest list two pages long; he shreds it to spite her and then creates one of his own. The five people who show up for the party - Jennifer Janzen (actually Sara Wolfe) (Ali Larter), Eddie Baker (Taye Diggs), Melissa Margaret Marr (Bridgette Wilson), Dr. Donald W. Blackburn (Peter Gallagher), and Pritchett himself - aren't the ones he invited. Neither Evelyn nor Steven know who they are. Despite this, Price continues the party's theme, offering $1 million to each one who stays in the house and survives until morning, with any person not making it having his money added to the pot.

Shortly afterward, the security gates are tripped, locking everyone inside and forcing them to remain there until the gates unlock in the morning. Price scolds Carl Schecter (Max Perlich), a company employee - who has developed a series of harmless traps to scare the guests - for not letting him know he planned to pull a stunt like that. Schecter claims it wasn't him who triggered the lockdown, and Price is then convinced that Evelyn did it somehow. Shortly after, Melissa is killed by one of the ghosts when she wanders off into the basement of the house. It's revealed that the spirits themselves created the guest list specifically to include the descendants of the five members of Vannacutt's staff who didn't die in the 1931 fire. It is also revealed that Evelyn and Blackburn are working together to scare the other guests into killing Steven. Evelyn then kills Blackburn and uses his body to frame Price. Sara comes across an incoherent Price in the basement, and believing that he is Blackburn's murderer, shoots him when he approaches her. After the others return upstairs, Evelyn approaches Steven to gloat, and Steven, protected by a bullet-proof vest, attempts to kill Evelyn. The two scuffle and accidentally unleash the Darkness of the house when Price throws Evelyn through a decayed door. The Darkness is a dark, shape-shifting creature composed of the spirits in the house; this force pursues and tries to kill the remaining guests. It starts by assimilating and corroding Evelyn into itself, killing her while Price watches in horror.

The Darkness reveals that the souls that comprise it want to feed on all those "who are responsible". Upstairs, Pritchett, Eddie and Sara are trying to open one of the iron gates on the windows when they hear Price's screams from down the hall. Pritchett investigates, and The Darkness kills him while Price temporarily evades it. Price runs through the hall while Sara and Eddie follow. He figures that the only way to get out is to go to the attic and try to escape through there. Price runs ahead of them to find an escape route while Sara and Eddie stay behind. The Darkness seeps through the house and tries to kill them.

As they are running up the stairs to the attic, Sara trips, and the Darkness uses Melissa's form to try, without success, to lure her to it. Price by then has activated a pulley that reveals an opening in the window of the attic. Eddie and Sara arrive in the attic, while the Darkness seeps up the cracks of the wooden floor. Price sacrifices himself to give Sara time to escape, but when Sara escapes out through the window onto the building's roof, the Darkness then severs the rope holding the iron gate, trapping Eddie inside.

When The Darkness confronts Eddie about his ancestor's actions, Eddie screams that he was actually adopted. Pritchett's ghost then appears and opens the iron gate, and Eddie escapes. Pritchett's ghost and the Darkness then both fade away. As Sara and Eddie sit in exhaustion over the night's events, they notice an envelope halfway through the gate. It contains five checks for $1 million each.

In an epilogue, a film is shown with the patients torturing Evelyn and Price in what appears to be "the other side".

Similarities with the Original[]