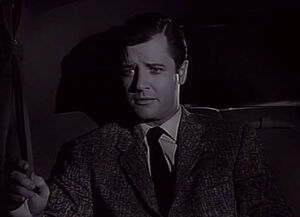 Lance Schroeder is one of the guests of Frederick Loren's party at "The House on Haunted Hill".

Lance is a test pilot, who was in desperate need of money. When he was invited by Frederick Loren to spend a night at "The House on Haunted Hill" for $10,000, Lance accepted the invitation.

Lance is driven to the House on Haunted Hill in a funeral car with the other four guests. They arrive at the house and go inside, where Loren meets them and has guest Watson Pritchard take them on a tour of the house. Loren explains that at midnight, the caretakers of the house will leave and lock all doors and windows, trapping the guests until morning.

While Lance and other guest Nora are in the basement, Lance is mysteriously hit on the head, and the other guests take him back upstairs to treat his injury. After Dr. Trent treats his injury, Lance and Nora go back down to the basement to find out how Lance hit his head, and Nora supposedly sees a ghost, but Lance is skeptical.

Shortly after, Lance meets Loren's wife Annabelle, who warns him that Loren can be very murderous and psychopathic, making Lance suspicious of him. As the party begins shortly before midnight, Annabelle gives Lance and the other guests a gun each for protection. Nora begs Lance to be allowed to leave, but before she can, the caretakers leave and lock up the house early, trapping Lance and the others inside.

Shortly after, Nora takes Lance, Loren and the other guests to her room to show them a decapitated head she found in her suitcase, but when they find there is no head, they leave an upset Nora alone in her room. Some time later, Lance goes to Nora's room to comfort her, but he finds Nora gone and a decapitated head in her closet. Lance takes the head back downstairs and confronts Pritchard about it. Just then, Annabelle apparently hangs herself and Lance and Trent cut the seemingly dead Annabelle down.

Lance then finds Nora, who tells him that Frederick Loren tried to kill her, making Lance believe that Loren is insane. Lance tells Nora to hide in his room and let no-one know she is there, and then goes to a meeting in the living room between Loren and the guests, over Annabelle's death. At the meeting, Lance and the other guests all suspect Loren of being the murderer, which he denies. Loren and the guests then all go to their rooms to wait until morning, when they can leave the house and contact the police.

Lance tells Nora that he believes it was indeed Mr. Loren who attacked her, and that he will go search for a way out of the house so he can contact the police before someone else dies. Lance finds a secret room hidden behind a moving wall, and is trapped inside when the wall shuts on him.

Nora, Pritchard and Ruth later find Lance and reopen the wall. When Nora reveals that she has shot and seemingly killed Loren, she, Lance and the others go down to the basement, where they find Loren is alive. He explains that Nora's gun was loaded with blanks, and that Trent and Annabelle were the true culprits and are now both dead. Loren then leaves, and just when Lance and the others believe the horror is over, Pritchard proclaims that Trent and Annabelle have joined the ghosts of the house, and that they will soon come for them.