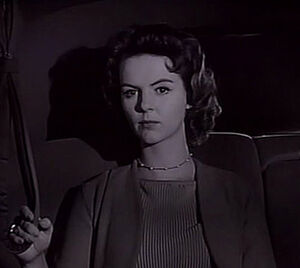 Nora Manning is one of the guests of Frederick Loren's party at "The House on Haunted Hill".

Nora worked for Frederick Loren's company and desperately needed money to support her entire family. When Loren invited her to spend a night at "The House on Haunted Hill" for $10,000, Nora accepted the invitation.

Nora is driven to the House on Haunted Hill in a funeral car with the other four guests. They arrive at the house and go inside, where Loren meets them and has guest Watson Pritchard take them on a tour of the house. Loren explains that at midnight, the caretakers of the house will leave and lock all doors and windows, trapping the guests until morning.

While Nora is in the basement with other guest Lance Schroeder, Lance is mysteriously locked in a room, and Nora sees what she thinks is a ghost. She tells the other guests that Lance is in trouble, and they find Lance has hit his head and take him back upstairs. After Dr. Trent treats Lance's head injury, he and Nora go back downstairs to find out how Lance hit his head. Nora sees the supposed ghost again, but Lance is skeptical that there was anything, leaving Nora upset.

Nora storms back upstairs and meets Mr. Loren's wife, Annabelle. Annabelle warns Nora that she's in danger, and to never go anywhere alone in the house again. A short while later, when Nora is in her room getting ready for the party in the house's living room, she finds a decapitated head in her suitcase, and is attacked by a man in a dark, hidden room. A traumatized Nora runs downstairs to tell the other guests what she saw, but Mr. Loren then discovers that the supposed ghosts nora saw in the dark room and the basement are just Jonas Slydes and his wife; the caretakers of the house.

While Nora is alone in her room, an unseen assailant attacks her in the dark, throws her in a room and leaves her. Later, Lance finds Nora and hides her in a bedroom, where Nora explains to him what happened to her, and that she is convinced her attacker was Mr. Loren. Lance explains that Annabelle has hung herself, and tells Nora to lock herself in the bedroom and wait for Lance to return. Lance eventually returns, and tells Nora that he is certain that Loren is the killer. He then goes to look for a way out of the house and tells Nora to wait in the room in the meantime.

When Nora sees Annabelle's supposed ghost in the bedroom's window, she flees downstairs and is attacked by several supposed ghouls. Nora goes down to the basement, and when Mr. Loren arrives there as well, Nora shoots at and seemingly kills him. She then runs back upstairs to Lance, Ruth and Pritchard, and informs them that she has shot Loren.

The three guests then go down to the cellar to find Loren alive. He explains that Nora's gun was loaded with blanks, and that Trent and Annabelle were the true culprits and are now dead. Loren then leaves, and just when Nora and the others believe the horror is over, Pritchard proclaims that Trent and Annabelle have joined the ghosts of the house, and that they will soon come for them.