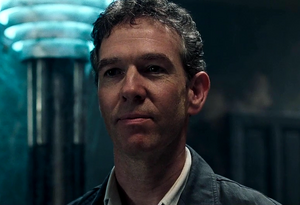 Dr. Richard Hammer was a college teacher who was obsessed with finding the Baphomet Idol. He was killed during the last known visit to the Vannacutt Psychiatric Institute.

Dr. Hammer became obsessed with finding the Baphomet Idol, and spent twenty years scouring Europe for it. Kyle was his assistant, and one of Richard's former students was Desmond Niles, who became an art dealer to Richard's disgust.

One day, Richard was contacted by Sara Wolfe. She told him that she had found Dr. Richard B. Vannacutt's journal, and that it said that the Baphomet Idol was hidden in the Vannacutt Psychiatric Institute for the Criminally Insane on the coast of Los Angeles.

One of Richard's students, Michelle, discovers Richard's obsession with finding the Baphomet Idol. She seduces him. While Richard and Michelle are making out, Kyle interrupts to inform Richard that Sara Wolfe has died in an apparent suicide.

Richard then goes to Sara's apartment; there he meets Paul, and Sara's sister Ariel. Richard tells them both of how Sara planned on returning to the Vannacutt asylum with him, but the two believe he is lying. They then leave, but not before Richard warns them about an art collector who is likely after the Baphomet Idol.

Richard travels to the asylum that night with Kyle and Richard. Going inside, they find Ariel and Paul held captive by Desmond Niles - the art collector whom Richard previously spoke of - and a team of mercenaries hired by Desmond. Michelle then reveals that she is Desmond's girlfriend, and was using Richard to learn the Baphomet Idol's location. When the facility ultimately goes into lockdown, Ariel explains to Richard and the others that Sara was right about the asylum; it really is alive.

Richard, Paul, Kyle and Ariel take Desmond and Michelle captive. They make plans to escape from the facility. Richard is torn between finding the Baphomet Idol before Desmond does, and escaping with Paul and Ariel. Upon discovering that a sewer tunnel runs directly under the asylum's washroom, they travel there...and find a drain leading into the sewer which they can access. The group travels through the hydrotherapy room, where Desmond and Michelle break free. They throw Kyle into the hydrotherapy pool, and then escape with the group's only map of the asylum.

Kyle is killed by the ghosts of the pool before Ariel can save him; and she herself narrowly escapes the same fate...thanks to Paul and Richard, who use a chain to drag her out of the water. Richard, Paul and Ariel continue to the washroom. Richard blames himself for his assistant's death, but Ariel assures him that it was Desmond's fault, not his. The trio reach the washroom, but can't move the grate on the drain. Ariel then has another vision...from which she and the group realize that, in order to leave the house, they must find and destroy the Baphomet Idol.

Following Ariel's vision, she travels with Richard and Paul through a tunnel in the asylum's crematorium. The tunnel leads to the Heart of the House, where the Baphomet Idol resides. Richard is temporarily hypnotized by the Idol's influence, but Paul snaps him out of it. When the group can't find a way to destroy the Idol, Ariel decides to remove it from the building instead...by sending it down the washroom drain into the sewer. Richard and Ariel flee back to the washroom with the Idol, but by disturbing the Idol they alert all the building's ghostly residents.

Just before Ariel can throw the statuette down the drain, Richard is overcome by the Idol's influence taking advantage of his avarice; it drives him attack Ariel and wrestle the Idol away from her. Richard nearly strangles Ariel as the ghosts arrive, but with Ariel's encouragement he fights the Idol's influence enough for her to push him off, and he recovers his senses. After Dr. Vannacutt knocks Ariel out, Richard attempts to attack him in defense of her, and Vannacutt repeatedly bashes Richard's head against a wall as Richard calls out to Ariel to wake up, eventually killing Richard. Ariel uses this opportunity to dispose of the Baphomet Idol. In the aftermath of the ghosts' departure, Ariel approaches Richard's open-eyed body and closes his eyes.

Though Richard was sometimes irritated by Kyle's antics, he did genuinely care about Kyle, and was the most heavily affected by his death.

Michelle was able to seduce Richard, and when Richard discovered that she was really with Desmond, he was visibly upset.

Richard evidently cared about Ariel and was concerned for her safety, he helped Paul rescue her from Dr. Vannacutt's deadly Hydrotherapy Pool.

Richard and Desmond had a bitter rivalry and strong dislike for one another.