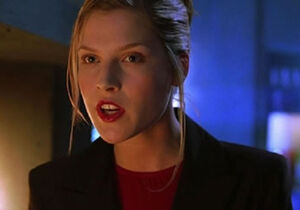 Sara Wolfe was one of the two survivors of Steven Price's party at the "House on Haunted Hill".

Sara had a sister Ariel. At some point in her life she started working for Jennifer Jenzen, whom she greatly hated. When an invitation to Steven Price's party at the "House on Haunted Hill" was sent to Jenzen (with a reward of $1 million if she was able to survive the entire night in the asylum), Sara took it and impersonated her at the party.

Sara goes to the Psychiatric Institute with three other guests, where they find that they aren't the ones either Steven or his wife Evelyn originally invited to the party. After Sara and the other guests arrive, the facility mysteriously goes into lockdown and all the doors and windows are automatically sealed with iron gates, trapping the guests inside.

Shortly afterwards, they are each given a handgun for protection, but they can't tell whether or not they are loaded with actual bullets as the clips are welded shut. Sara, with Steven Price, other guest Eddie Baker and the house's owner Watson Pritchett, goes downstairs into the remains of the old asylum in search of a master control to unseal the building. They find the asylum's saturation chamber and electrotherapy room, then Sara and Eddie get separated from Pritchett and Price.

Sara and Eddie search the asylum for Price and Pritchett, and along the way, Sara is able to rewire the asylum's electricity to get some of the lights on. Shortly after, Sara is separated from Eddie, leaving her alone, and goes looking for him, believing he is playing a prank on her. When Sara sees an illusion of Eddie falling into a vat of blood, she rushes over to the vat to try and save Eddie. Suddenly, an unseen ghost tries to drag Sara into the vat until the real Eddie arrives and pulls her free.

Eddie and a traumatized Sara go back up into the house and demand from Pritchett to know what happened. They then hear Melissa screaming from downstairs, and Sara, Eddie, Price and Blackburn go down back into the asylum. They search for Melissa, but all they find is her camera and a trail of blood leading across the walls and ceiling of a surgery ward. They return up into the house with the camera, and try, without success, to find out from Melissa's camera what happened to her. When it turns out that the group's handguns are loaded, they become more suspicious of Price.

Sara and Eddie later find Vannacutt's office, and discovered from a poster of Vannacutt's staff that all of the guests invited (except for Blackburn) are related to one of the five staff members that survived the revolt and fire of 1931. The two, along with Pritchett, then go back up into the house and wait for Blackburn. When Blackburn doesn't return, Sara, Eddie and Pritchett go back down to the saturation chamber in the asylum; where they find Blackburn's decapitated corpse and Price gone. Sara immediately points the finger of blame to Price and goes looking for him.

Sara eventually finds a blood-covered Price near the entrance up into the house, and when he advances towards her, she shoots him over and over with her handgun until it runs out of bullets. Eddie and Pritchett then arrive and take a traumatized Sara up into the house, where they try to crowbar the iron gates open again. Eventually, Price comes back up into the house, incoherent but alive. He, Sara and Eddie realize that Pritchett was right about the building being alive all along when The Darkness seeps up into the house from the asylum and attacks the three, assimilating Pritchett.

Sara, Price and Eddie flee upstairs, followed by The Darkness. The Darkness tries to use Melissa's assimilated ghost to try and lure Sara to it, but this only further horrifies Sara. The trio escape into the attic, where Sara and Eddie find Price has managed to open the iron gate on the attic's window. When The Darkness seeps up into the attic, it tries to absorb Sara, but Price pushes Sara out of the way and is assimilated instead. Sara and Eddie are then able to escape out the window and onto the roof of the building at the last second before The Darkness can absorb them. They then find the envelope containing the five $1 million checques jammed under the iron gate, with the 5 million dollars as their prize for surviving.

After the incident at the Vannacutt Institute, Sara and Eddie reported it, but no-one believed them and the late Steven Price was blamed for the other guests' deaths. At some point, Sara found Vannacutt's diary and discovered from it that the Baphomet Idol was hidden in the house and was what was keeping the souls of everyone who died in the building trapped there.

Eight years after the deaths of Steven Price and the other guests at the house, Sara called Dr. Richard Hammer about the Idol and set about returning to the Institute to find and destroy the Idol to free the ghosts. However, before Sara could return to the house, she was shot and killed by Desmond Niles when she refused to cooperate with him in his search for the Baphomet Idol. Desmond faked Sara's death as a suicide.

After Sara was murdered, her sister Ariel, and Ariel's friend Paul, went to her apartment, where Sara's ghost appeared to Ariel and told her through a cryptic message to free the spirits trapped in the Vannacutt asylum.

Sara and Eddie apparently had a romantic interest in one another, and Eddie once even flirted with Sara.

After Sara declared that the Vannacutt Institute was haunted, Ariel became more distant of Sara, but Ariel was still enraged and upset by Sara's death.

Sara developed a hatred for Price after she and the others believed that he had murdered Blackburn, and even tried to shoot and kill him. It had seemed to change after witnessing the building coming to life and Price warns her to flee and even sacrificing his life for her.