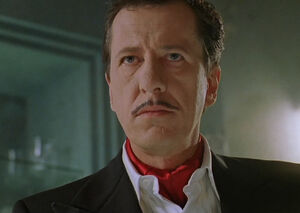 Steven H. Price was an amusement park tycoon who held a party at the "House on Haunted Hill", where he was killed.

Steven H. Price was a millionaire and amusement park mogul with a wicked sense of humour. Most of the amusement park rides he invented would terrify the customers by appearing to horribly malfunction with fatal consequences, only for it to then be revealed to be part of the ride.

At some point, he married a woman named Evelyn Stockard, who became his spoiled trophy wife. Evelyn attempted to kill Steven several times for his money, but all attempts failed. Evelyn's frequent attempts to kill Price quickly became part of his and his wife's life.

On Evelyn's birthday, while Channel 3 is interviewing Steven at his amusement park, he is called by Evelyn, who tells him that they are throwing her birthday party at the Vannacutt Psychiatric Institute for the Criminally Insane. While Price does indeed decide to rent the building from Watson Pritchett and throw Evelyn's party there, he replaces all of the guests on Evelyn's guest list with his own ones.

That night, when Evelyn, Pritchett and the guests arrive with Price at the Institute, Steven and Evelyn find that none of the guests are the ones they invited: Sara Wolfe (impersonating Jennifer Janzen), Eddie Baker, Donald W. Blackburn and Melissa Margaret Marr. Steven immediately suspects that Evelyn is somehow responsible for changing the guest list, and vice versa.

Shortly after the guests arrive, Price gives each of them a handgun (seemingly loaded with blanks), and the facility mysteriously goes into lockdown, sealing all the possible exits with iron gates. Price goes to the control room where his employee Carl Schecter is stationed, and questions him about the lockdown. When Schecter tells Price that he was not the one who triggered the lockdown, Price then points the finger of blame to Evelyn.

Price then goes down into the old asylum, where he meets up with Sara, Eddie and Pritchett, and searches the basement with them for a master control for the lockdown. When the four come across the asylum's Saturation Chamber, Price and Pritchett are separated from Sara and Eddie, and continue to search for a mechanism by themselves. When Pritchett and Price find that there is no lockdown mechanism in the basement, they return up to the lobby and meet up with Eddie and a traumatized Sara there.

A few minutes later, when Price and the others hear Melissa screaming from in the asylum, they go back down to find her, but they only find her camera and a trail of blood. When Price and the others discover that the blanks in their handguns have been replaced with real bullets (when Evelyn tries to shoot Price), Sara, Eddie and Blackburn become increasingly suspicious of Price and set about trying to escape the house before Melissa's killer comes for them. Price, meanwhile, goes back to the control room and finds Schecter dead with his face carved out.

He then sees Dr. Vannacutt in the lobby on one of the cameras, and, believing him to be someone paid by the supposed killer to pose as a ghost, searches the house for him.

When a brownout occurs in the facility, Price and the others go down to the asylum's electrotherapy compartment to find Evelyn seemingly electrocuted to death. A grief-stricken Price immediately suspects one of the other guests of murdering his wife, and threatens them with a gun. The guests then turn on Price and lock him in the Saturation Chamber for their safety. When Blackburn is left alone to guard Price, he activates the Saturation Chamber and leaves. The chamber causes Price to have a vision of himself being tortured by Evelyn, Vannacutt, and the old asylum's staff, until he eventually passes out.

When Price comes to, covered in blood, by the entrance from the asylum up to the house, Sara believes him to be the killer and shoots at him. Price is secretly protected by a bullet-proof vest, and when Evelyn arrives and reveals that she only put up with Steven for his money, Price attacks her, throwing her through a decaying door into a rotted room. This action releases The Darkness, which attacks and absorbs Evelyn as a horrified Price watches.

The Darkness then explains to Steven through Evelyn's newly-assimilated soul that it is composed of all of the dead spirits in the building, and that the spirits want to absorb Price and the other remaining guests. Price flees back upstairs, pursued by The Darkness, and watches in horror as it nearly assimilates Pritchett, who dodges out of the way in the nick of time.

An exhausted Price confirms to a stunned Sara, Pritchett, and Eddie that the house really is alive, then, after helping Sara get up the stairs and away from The Darkness, this proves to the group that they can trust him, he runs up to the attic in search of a way out. While trying to open a window, Price accidentally activates the master control, unsealing the facility and opening the attic window. Shortly after, Sara, Pritchett, and Eddie follow Price up to the attic, pursued by The Darkness. But mere moments before he can leave out the window with the group, The Darkness suddenly charges into the room, and with nowhere to run and Price, overwhelmed by fear, can only scream in horror as The Darkness then kills him, absorbing his soul and reducing his body to a dried, rotted husk which is then blown apart by a gust of wind from the window.

After he was assimilated and killed by The Darkness, Price's soul was trapped in the house with the other ghosts. He is shown being tortured alongside Evelyn by the dead asylum patients, in an identical fashion to Dr. Vannacutt during the 1931 revolt. However, when Ariel Wolfe removed the Baphomet Idol from the asylum in Return to House on Haunted Hill, Price's ghost was presumably freed from the building.

After Sara and Eddie escaped the facility and explained what had happened in the house, police concluded that Price went mad and was the one who killed the other guests.

Evelyn attempted several times to kill Steven for his money. Steven did not treat Evelyn very well and even tried to kill her when she and Blackburn conspired to murder him. However, Steven did apparently love Evelyn deep down, as he was stricken with grief when he believed she was dead, and he was visibly horrified when he watched the Darkness absorb her.

When Steven believed that one of the guests had murdered his wife, he threatened Sara. But later, when The Darkness went after Sara, Price helped her and her friends escape into the attic, but was abruptly murdered.