Edit
watch 01:25
Jurassic World: Dominion Dominates Fandom Wikis - The Loop
Do you like this video?
Play Sound
The Darkness 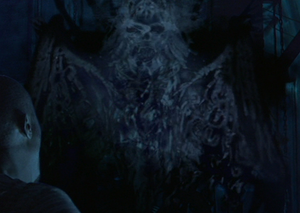 The Darkness is a dark, shape-shifting monster composed of all the dead souls in the Vannacutt Psychiatric Institute for the Criminally Insane, which seeks to absorb anyone trapped in the asylum into it to join the other ghosts.

The Darkness was apparently imprisoned within a rotted room located in the Vannacutt asylum's basement, the only entrance to which is an old door at the end of a short tunnel. However, disturbing the room will release The Darkness. During one of the reconstruction attempts of the asylum, it would appear that at least some of the workers discovered what disturbing the room does. They tried to build a thick concrete wall to conceal the tunnel which led to the room, in order to stop anyone who entered the house in future from releasing The Darkness. However, the workers were presumably either killed before they could finish the wall, or the ghosts smashed the concrete wall open; as a massive section of the wall is missing, leaving a hole large enough for a person to fit through.

During Steven Price's party at the former-asylum, he and his wife Evelyn accidentally release The Darkness when Steven throws Evelyn into the rotted room through the decaying door. The Darkness then absorbs Evelyn into it, and explains to Price through her assimilated soul that the ghosts that compose it want to assimilate him and the remaining others in the house into The Darkness to complete the dead asylum inmates' revenge.

Horrified, Steven retreats upstairs, chased by The Darkness. The Darkness seeps up the stairs from the asylum into the house after Steven, and absorbs Watson Pritchett, then goes after the remaining three. It tries to use Melissa's assimilated ghost to lure Sara to it so it can absorb her, but it fails. Sara, Eddie and Price escape up into the attic, but The Darkness seeps into the attic after them through the floorboard cracks.

The Darkness tries to assimilate Sara, but Price pushes her out of the way so The Darkness ends up absorbing him instead. Sara escapes out a window that Price managed to open, but before Eddie can get out with Sara, The Darkness severs the ropes holding the window's iron gate up, shutting it and trapping Eddie. The Darkness corners Eddie and taunts him through Evelyn, Vannacutt and Melissa's assimilated ghosts. It then prepares to absorb Eddie when he reveals that he was adopted.

At this revelation, Pritchett's ghost opens the window just long enough for Eddie to escape through onto the facility's roof from The Darkness. With all of the five surviving orderlies' descendants either absorbed or out of the ghosts' reach now, The Darkness vanishes back into the house.

Because most of the ghosts that compose The Darkness were patients at the asylum who died either in Vannacutt's experiments, or the fire of 1931, The Darkness will relentlessly attempt to assimilate the descendants of the five surviving orderlies, and anyone who gets in The Darkness's way. However, it appears that descendants who were raised in an orphanage or by foster-parents were somehow not involved.