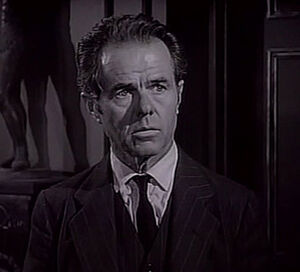 Watson Pritchard is the owner of The House on Haunted Hill, and genuinely believes that the house is haunted.

When millionaire Frederick Loren rented the house from Pritchard, Loren invited Pritchard to his haunted house party in the house. Despite the fact that this meant spending another night in the house, Pritchard accepted.

Pritchard is driven to the House on Haunted Hill in a funeral car with the other four guests. They arrive at the house and go inside, where Mr. Loren meets them. Pritchard tries to warn the other guests of the ghosts that supposedly inhabit the house, but they do not listen. Loren convinces Pritchard to take him and the guests on a tour of the house, and Pritchard shows them several rooms and explains how several of the seven supposed ghosts died.

Shortly after, Annabelle Loren gives Pritchard and each of the other guests a gun for protection, but Pritchard does not see the point in having them due to the fact that they cannot harm ghosts. Nora then takes Pritchard up to her room to show him a decapitated head in her suitcase, but Pritchard finds no head, prompting an upset Nora to kick Pritchard and the others out of her room. A drunken Pritchard concludes that the ghosts are closing in on Nora, then goes back downstairs.

Later, when Lance comes down with a decapitated head and questions Pritchard about it, the latter is led to believe that the ghosts have taken Nora. Lance demands Pritchard tell him where Nora is, but before the argument can get any more intense, they hear Annabelle screaming and Lance goes off to investigate.

When it turns out that Annabelle has apparently hung herself, Pritchard goes into Frederick's room where Annabelle's body is. He tries to warn Loren that the supposed ghosts of the house will take Annabelle's soul, but Loren throws Pritchard out of his room. Pritchard, Loren and the other guests then have a meeting downstairs to discuss Annabelle's supposed suicide, which the others believe was murder. The guests ultimately go to bed for the night, and to wait until the Slydes return in the morning.

When Nora returns having shot Mr. Loren, and finds Lance trapped behind a moving wall, she gets Ruth and Pritchard, and Pritchard frees Lance. The group then go down to the basement, to find Loren alive. Loren explains that Dr. Trent and the actually-alive Annabelle were conspiring to indirectly murder him, and that the two are now dead. Pritchard predicts that Trent and Annabelle have joined the ghosts, and that the ghosts will come for him next.